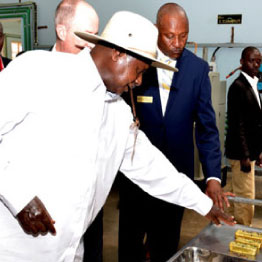 Gold exports from Uganda recorded an 89 per cent increase in the year ending 2016, a Bank of Uganda (BoU) report has shown. Although Uganda is not a big miner of gold, experts said the re-exports saw the country register $340 million (Shs1.2 trillion) revenue up from $36 million (Shs129 billion) exported the previous year.

This performance makes the commodity the country's second largest export product after coffee. According to the report, most of the gold was destined to United Arab Emirates (UAE). Because of this, UAE became the leading export destination recording 20 per cent of Uganda's exports. Responding to this performance, Mr Adam Mugume, the director of research at BoU, said: "The increase in exports to UAE is largely because of the increase in gold exports."

Mr Mugume further said that because of gold the country's exports grew by 10.3 per cent in 2016. In February President Museveni commissioned the African Gold Refinery, a $15m (Shs54 billion) plant in Entebbe, Wakiso District. During the commissioning, Mr Alain Goetz, the chief executive officer of this company, said the gold they are exporting is from all over the region. "We are also in the process of getting a mineral dealer licence in Uganda," he said.

Mr Ramathan Ggoobi, a Makerere University Business School economist and lecturer, shares that the poor export performance lately is on the account of a weakening external position, characterised by low global demand. "The South Sudan crisis, declining foreign direct investment, and global uncertainties, particularly the aftermath of the Brexit and the USA elections is the other cause of the country's low exports," he noted.

East Africa took over from Comesa as the leading destination for Uganda's exports rates at 30 per cent. Middle East was the second leading export destination recording 20 per cent of the total country's export share. One would ask why the sudden rise of Middle East which has not been ranked highly on Uganda's export destination. Ms Noreen Kamooti, a promotions officer at the Uganda Export Promotion Board, said gold, fruits and vegetables are responsible for the good performance.