Ethiopian to Stretch Wings to Antananarivo 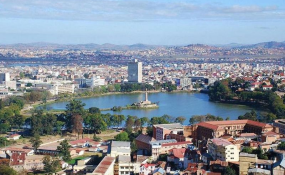 Africa's largest airline group, Ethiopian Airlines announced that it would add Antananarivo,Madagascar, to its network as of March 28, 2017. Ethiopian new nonstop flight would operate three times weekly to and from Addis Ababa, where passengers can connect to and from cities throughout the world, including Washington, London, Frankfurt, Paris, Rome, Beirut, Jeddah, Cairo, Dubai, Delhi, Mumbai, Hong Kong, Shanghai and Beijing. Ethiopian Airlines Group CEO Tewolde Gebremariam said: "Ethiopian, as a national carrier is pleased to add Madagascar to its wide network. Having started serving Africa seven decades ago with our motto "Bringing Africa Closer", we are now continually enhancing our services and working to "Connect Africa to the rest of the world."

Read More: How Becky Ndegwa stumbled upon her successful traditional blanket business
According to him ,as air connectivity is an essential cause and driver of national socio-economic integration, the new service would certainly contribute for the growing business and bilateral cooperation with other sisterly African cities. Moreover, Tewolde said travelers from Madagascar would be seamlessly connected with Ethiopian ever-expanding network across the five continents."I would like to thank all who made this route possible." Ethiopian is a truly indigenous Pan-African carrier that operates the youngest and the most modern fleet in the continent with an average aircraft age of less than five years. Madagascar would join the ever expanding Ethiopian network of 95 worldwide destinations. Antananarivo is the capital and the largest city of Madagascar. The island nation is known as a "biodiversity hot-spot" as over 90 percent of its wildlife is found nowhere else on earth. It is also home to lush rain-forests and is famous for its curious lemurs.
Source: All Africa
fShare
Tweet