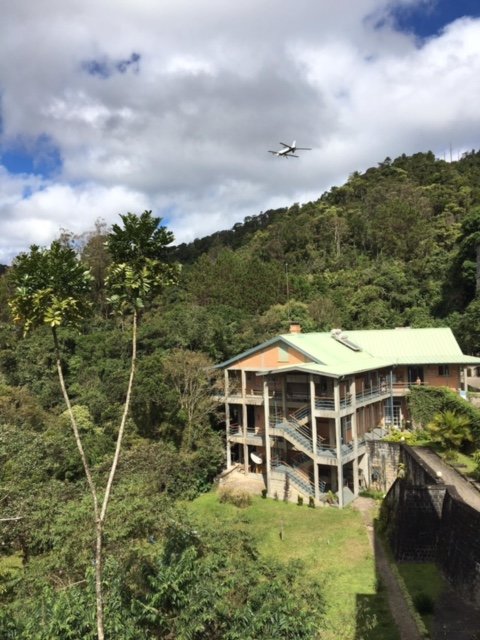 When drones are in the news these days, the context is typically war or surveillance or the speedy deliver of packages to impatient consumers. Here, Heidi Hutner of Stony Brook University offers a “Your Dot” contribution on a recent test in a roadless region in Madagascar that could signal an exciting new frontier for this technology – helping deliver health care to some of the world’s poorest, most isolated communities. Last summer, Stony Brook University’s Global Health Institute teamed up with Vayu, Inc., a Michigan start-up developing drones aiding medical care, to test aerial shipments of blood and fecal samples and drugs between remote villages in Madagascar and Centre ValBio, the university’s biological research center adjacent to a national park.

Parasitic diseases, tuberculosis and a range of other life-threatening illnesses are common among the Malagasy population. But many people live in remote and inaccessible areas. In Ifanadiana, the district where the drone flights took place, travel to medical facilities can take a day or more by foot, across treacherous terrain. “Often, the sick don’t want to walk long distances, they don’t want to leave their children behind and, in many cases, they associate hospitals with bad outcomes and death,” said Dr. Peter M. Small, who heads the university’s health institute and was formerly deputy director of the Tuberculosis Delivery Program for the Bill and Melinda Gates Foundation.

Medical teams visiting rural communities in Madagascar must tote heavy equipment and supplies such as liquid nitrogen, centrifuges, 40-pound generators, and several weeks’ supply of rice.Last summer, when four Stony Brook medical students—Jaydon Kiernan, Paul Castle, Koeun Choi, and Lee Hakami—planned a health research project in Madagascar, Small explored the idea of using drones to cut the time between diagnosis and treatment by transporting blood and fecal samples from patients to the laboratory at the ValBio research center. The Centre ValBio was founded in 2012 by Stony Brook primatologist and conservationist Dr. Patricia Wright, who for decades has worked in the region to conserve Madagascar’s endangered lemurs while advancing economic prospects for rural communities.

Small worked with Daniel Pepper, the founder of Vayu, and Madagascar officials in setting up the test. The Vayu drone, which can fly long distances but descend and rise like a helicopter, was ideal for work in forested terrain. When the drone first arrived in Madagascar from the U.S., the medical students divided their duties. Kiernan and Castle stayed in the villages of Torotosy and Ampitavanana, while Hakami and Choi were situated at the Centre ValBio, where they would receive and test samples. In the initial test flight, Choi and Lee sent pizza to Kiernan and Castle. “Everybody knew we were really sick of eating a steady diet of white rice for weeks on end,” Kiernan explained. With the flights connecting the lab and villages taking just 15 minutes, the pizza was still warm when it arrived, Kiernan recalled.

In return, Kiernan and Castle sent blood and fecal samples back to the lab for testing. The team members were unsure what to expect when villagers first saw a small white aircraft approach like glider and descending to a landing. In Torotosy, Castle said, residents “cheered and clapped.” There was more hesitation in Ampitavanana, but once the drone landed, the villagers “ran toward it from all directions,” Castle said.

Kiernan attributes the villager’s trust in him, his colleagues, and the drone to the three decades spent by Wright building strong relationships with the surrounding communities. Going forward, Wright and Small hope to station a fleet of medical drones at the ValBio center. As the drone project expands, the Global Health Institute plans to collaborate with PIVOT, a nonprofit group that works on upgrading clinics and hospitals in rural Madagascar. “To a mother with a dying child,” Wright said, “Imagine what getting the right medication this quickly could mean.”

“We’re making house calls with drones,” Small added with a smile. Wright noted that steps to improve health in remote places matter everywhere on a connected planet. “In our world today, where we can fly all over the globe in a day or two, health is no longer local, not even global, but planetary,” she said. Wright also has plans to use drones for her conservation work on forest restoration and health, but that’s another story.