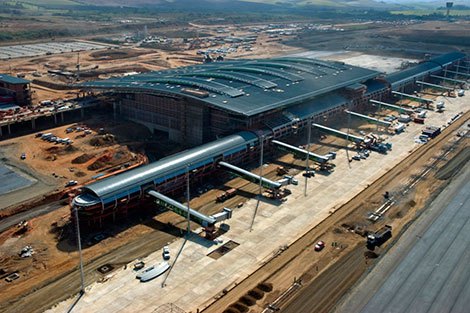 The new Luanda International Airport, which is being built since 2007 in Bom Jesus commune, Icolo e Bengo Municipality, is scheduled to be ready for inauguration and full operations in 24 months' time, disclosed last Saturday the Transports minister, Augusto Tomás. Speaking to the press, on the fringes of the assessment visit of the Head of State, João Lourenço, to the said airport works, the Transports minister disclosed also that the undertaking is at about 57.5% completion stage, adding that by the end of the year 2019 the infrastructure should be ready to start operations.

According to Augusto Tomás, due to financial, technical and operational reasons the works had been paralysed. Moreover, he revealed, the contractor had also to be replaced with another company with higher capacity and credibility, which has already happened. The minister seized the occasion to explain that the present international airport of Luanda (4 de Feveiro Airport) will continue to operate when the new is unveiled, however it will be only for executive and emergency flights.

Accompanied by his wife, First Lady Ana Dias Lourenço, the Angolan Head of State received updated information on the pace and stage of the works. The new airport is being built in an area of 10,000 hectares and it is located forty kilometres away from the centre of Luanda.