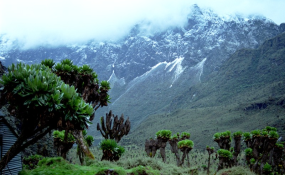 Uganda has said it's headed towards installing Cable Cars on Mountain Rwenzori as a means of boosting the tourism sector. The installation of cable cars will make it easier for Mountain climbers who have been spending more than five days to reach on the top of the Mountain. "The study is already done. We're now waiting for the consultant's report that will be discussed by the relevant stakeholders before we embark on procuring the contractor who will install the system on the Uganda's highest Mountain," said Uganda's Prime Minister Dr. Ruhakana Rugunda. This was during the 8thAnnual Tourism Sector Review Conference at Serena Hotel in Kampala.

Read More African Reports
Rugunda said the Government has finalized feasibility studies for the cable car project. Mountain Rwenzori is one of the top destinations for tourists to Uganda. There are many visitors who visit the mountain for adventure like mountain climbing. Apart from Mountain climbing, Tourists trek to Mountain Rwenzori for the creator, lake adventuring glaciers on the top of the Mountain, alongside the wildlife in Rwenzori National Park. Mountain Rwenzori also known as mountains of the moon with six main peaks exceeding 4,500m above sea level are namely Mt. Stanley, Mt. Speke, Mt. Baker, Mt. Gessi (in the Democratic Republic of Congo), and Mt. Emin Pasha, Mt. Luigi di Savoia.
They are found along the border between Uganda and DRC, the highest peak is Margherita which is 5,119m above sea level. In East Africa Kenya Introduced the sane system on Mountain Kenya which has supported the country to receive more visitors with the desire for Mountain climbing. Apart from installing cable cars, the government also intends to develop a master plan for the source of the Nile. According to the State Minister for Tourism Godfrey Kiwanda Ssubi the master plan will help government in promoting the source of the Nile as tourism destination. "Yes the place is well known globally but for Government to earn from the resource we need to have its development master plan which can be used to attract the private sector to invest in infrastructures like hotels, lodges and other facilities," Kiwanda said.

Commenting on the performance of the tourism sector in the ending financial year 2016/2017 the Minister for tourism said the sector achieved strong progress especially on the number of new arrivals. "The tourism sector has been growing consistently since the restoration of peace of and security, the sector continued to be the leading foreign exchange earner contributing US$1.37 billion (UGX6.17trillion) to Uganda's GDP. "The sector is employing about 6% of the Uganda's labour force in2016/2017," said Ephraim Kamuntu the Tourism Minister. He said they will continue striving to see that the sector develops since it's considered as the leading sector to drive Uganda to middle income status by 2040.