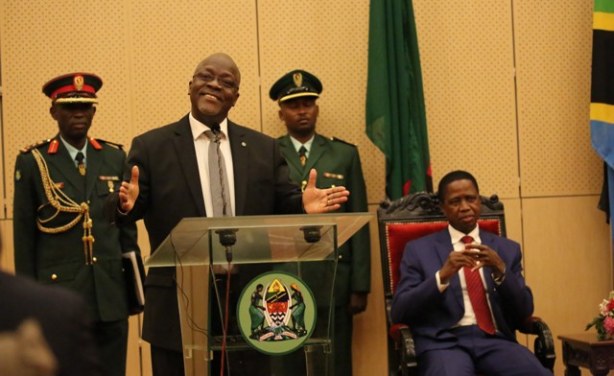 Dar es Salaam — Problems facing the Tanzania Zambia Railway Authority (Tazara) yesterday dominated talks between President John Magufuli and his Zambian counterpart, Edgar Lungu, with the two countries seeking a permanent solution to Tazara's long-standing woes. In a joint press briefing after the talks, President Magufuli said the two countries had agreed that the Tazara management setup needed to be changed to allow people from outside Tanzania and Zambia to be considered for senior managerial positions in the firm. This is contrary to the current arrangement where the managing director comes from Zambia with Tanzania providing the deputy. "We have agreed that the attorney generals of the two countries will meet as soon as possible to review the legal framework of the Tazara Act of 1975 to accommodate changes in the management setup," he said.

Apart from efforts to revamp Tazara, other issues which featured in the talks included reviving Tanzania Zambia Mafuta (Tazama) Pipelines Limited and finalising a one-stop border centre (OSBC) in Tunduma. Also discussed were plans to connect Tanzania, Zambia and Kenya in a common electricity grid, relations of Southern African Development Community (Sadc) member countries with the international community as well as economic development in the two countries. However, the two heads of state did not say whether they were building a foundation for China to take over management and operation roles in Tazara as reported earlier in the year.

It was reported that the three countries (Tanzania, Zambia and China) were preparing to reduce the size of the Tazara workforce and that Tanzania and Zambia would be required to review domestic laws to provide preferential provisions in the running of Tazara with a view to attracting more private players. But yesterday, President Magufuli said their decision was aimed at restoring Tazara's ability to serve its customers. He said in 1976 Tazara was able to transport five million tonnes of cargo annually, but that figure had dropped to 500,000 last year before plummeting further to 128,000 tonnes this year. "Members of the management attribute issues of capital to inefficiency of Tazara, but actually the management is the one to blame," he said.

He said while Zambia imported 1.9 million tonnes of goods this year, only a tiny fraction was transported by Tazara, with importers opting to use road transport despite being slower. The two presidents also resolved to reduce the number of checkpoints along the Tanzania-Zambia highway to four to cut the time it takes to transport goods between the two countries. Tanzania has committed to finalising the construction of the OSBC on its side of the Tunduma border. "The move will reduce delays and corruption at the border," said President Magufuli.

He added that it had also been agreed to evaluate the performance of Tazama Pipelines and embark on sweeping reforms that would raise its transportation capacity from the current 600,000 tonnes per annum to the 1.1 million tonnes. The two heads of state also witnessed the signing of an agreement on diplomatic consultations. The agreement was signed by foreign affairs ministers, Dr Augustine Mahiga of Tanzania and Mr Harry Kalaba of Zambia. Two agreements on transportation, immigration and prisons were not signed to pave the way for further consultations.

For his part, President Lungu pledged continuous cooperation between Tanzania and Zambia that would boost economic and diplomatic relations between the two countries. Earlier in the day, Mr Lungu said there were plans to extend the Tazara railway to Malawi and southern Zambia. He made the revelation when he visited the Tazara head office in the city where he also received a freight train carrying copper from Zambia and flagged off another train carrying cargo to Ndola, Zambia. He was accompanied by Dr Mahiga and the Deputy Minister of Works, Transport and Communication, Mr Edwin Ngonyani.

"I have come to breathe a new lease of life into Tazara and make it work for Zambia and Tanzania...the aim is to see that the railway is commercially used," President Lungu said. The Zambian head of state also visited the Tazama Pipelines facility in Kigamboni. He was accompanied by the Minister of Energy and Minerals, Prof Sospeter Muhongo, and Dr Mahiga. Mr Lungu is expected to conclude his visit today by touring Dar es Salaam Port before leaving for home at around 11.30am.