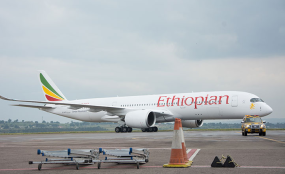 Addis Ababa — Ethiopian Airlines will fly to seven new destinations in the next five months, the firm said on Tuesday. In its new record expansion plan, the Ethiopian flag carrier says that starting February to June this year, it will fly to Victoria Falls in Zimbabwe, Conakry-Guinea, Antananarivo (Madagascar), Oslo (Norway), Jakarta (Indonesia) Chengdu (China) and Singapore. The firm's chief executive said the airline wants to tap into the global aviation market which Africa's share is only about three per cent. "As the largest airline group in the continent, we are highly concerned about the low base of air connectivity in the continent and we are setting record expansion to enable Africans to enjoy safe, reliable and economical air connectivity both within the continent and between the continent and the rest of the world," Mr Tewolde Gebremariam, the Ethiopian Airlines' Group chief executive officer, said.

Read: How A Top-Ranked Female Tennis Champ Became An Exercise Entrepreneur In Kenya
"Looking beyond the current economic slowdown especially in the oil export-dependent economies of Africa, we firmly believe that the continent will become the magnet for foreign direct investment, trade and tourism. "These are the engines of air travel growth and in turn, efficient air connectivity also drives socioeconomic development and we are happy to contribute our share in the 21st century African transformation," he said.