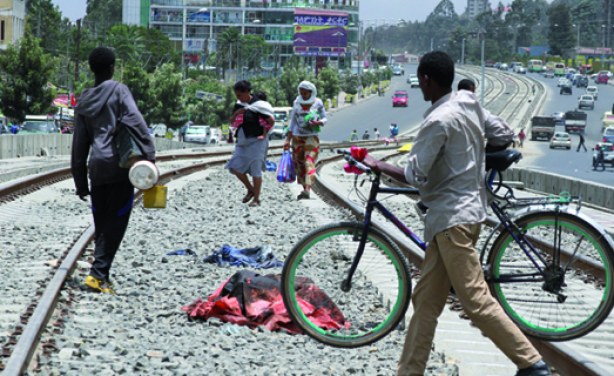 Despite the recent turmoil in some parts of the country, the Ethiopian economic outlook for the past months has reportedly been not bad. The Ethiopian Investment Commission recently announced that the "unrest has not caused serious impact on Foreign Direct Investment (FDI) flow into the country." According to the Commission's website, investments with capital of 560 million USD were registered during the quarter and this does not show significant decrease from the performance of same period last Ethiopian year. Some 124 investors have also expressed interest to do business in Ethiopia with 3.5 billion USD capital, it stated, adding that of those 74 are Chinese. Companies from Asia have growing interest to particularly invest in labour intensive projects such as textile, leather and electronics. It also further stated that an agreement was reached with a Chinese company for the construction of an industrial park in Oromia State, despite the unrest.

Read More: Inspirational African Women: Juanita Naidoo Rea
Considering the unrest brought harm to a considerable number of foreign and domestic investments, it is such a relief to find out that it did not have a significant impact on the inflow of investment into the country. Especially with a few states advising their citizens to avoid travel to Ethiopia, a lot of Ethiopians were concerned about the potential impact such a move could have on the future of the Ethiopian economy. The findings by the investment commission have, therefore, been great news for all concerned.

The fact that the unrest did not have a significant impact on investment flows into the country also indicate that the country's recently found reputation as a very viable destination of investment is planted on a stable foundation for it to be revoked easily. Despite the unrest, investors from across the globe showed their faith in the Ethiopian people's sensibility to lasting peace and stability. Ethiopia's economic growth and development stood the test of political instability months after it managed to fend off the tremendous challenge of a yearlong drought that proved to be the most severe in fifty years. If there is anything that shows us, it is that the economy is now mature enough to survive both natural and man-made challenges that come its way.

Now that the dust raised by the recent unrest in some parts of the country has settled following the effective implementation of the state of emergency and there is room for us to hear about something other than destruction, we have once again returned to numerous media reports about major investments planning to come to Ethiopia. The headline of one of such reports reads: "Top Tomato Paste Maker Quits Nigeria to Head for Ethiopia." Eric Umeofia, owner of Africa's top tomato paste maker Erisco Foods Ltd, said: "ease of doing business was his attraction in opening shops in the African countries (Cameroon, Cote d'Ivoire, Ethiopia and Kenya), following his plans to move out of Nigeria because of the harsh realities of doing business in the country."
Another report states that Siemens and Bosch are keen to invest in Ethiopia, claiming that the delegation of the two German companies described Ethiopia as a country that offers vast investment opportunities with a favourable climate to invest. The report quotes Richard Schurink, Regional Director for Foreign and Public Affairs of BOSCH as saying: "The investment climate is very positive along with the economic growth which helps foreign companies, especially, German companies to be interested in investment opportunities in the country." Lukas Duursema, Chief Executive Officer of SIEMENS East Africa Region, for his part stated: "Currently we are in the process of setting a branch office here in Ethiopia. Some of the investment incentives are very attractive and most definitely we can start concentrating on certain industries."

Yet another one of the reports states that Moroccan investors who accompanied the country's king Mohammed VI to Ethiopia have said that they are willing to do business in Ethiopia. The report states that the Moroccan King was in Ethiopia accompanied by a 43-person delegation of Moroccan investors for the official state visit to the country. Moroccan Agro-processing and renewable energy companies have shown interest to invest in Ethiopia.

After recent international reports on Ethiopia fundamentally carrying a pessimistic tone about the country's future, the short time it has taken to turn things back to their former glory is a testament to the resilience of the Ethiopian people to keep the development going no matter what. The short span of the recent negative reports about the country has also reminded the people of how close the chance to slip down is. For the people of Ethiopia have seen a glimpse of the length towards prosperity their current path could take them, they have resorted to protecting the journey.

The light at the end of the tunnel seems to constantly glow brighter as great news of the better future that awaits the country never seems to stop. The country enjoyed a few of those along the line. Ethiopia has been identified as one of the fastest growing economies in the world right along China and India. It has also been touted as one of the countries set to replace China as the world's manufacturing hub.

The latest of such accolades claims that Ethiopia is set to be the 66th world largest economy by 2020, up from 103rd in 2005, overtaking countries like Kenya, Guatemala and Bulgaria. An article by Valentina Romei headlined: "Datawatch: Ethiopia sprints ahead from 103rd to 66th largest economy in the world" states that Ethiopia's economy has been expanding at an average annual rate of 10 per cent in the 12 years to 2016 and growth is expected to remain strong in the years ahead, supported by higher agricultural production, and large public sector and foreign direct investments.

Changing a country that was once used to explain famine and drought in English dictionaries to a beacon of hope for all developing countries around the world is one special transformational feat. Although they are at the center of all the changes happening in the country and therefore no stranger to these achievements, the Ethiopian people are encouraged and motivated by such acknowledgments.