East Africa: The Quiet Impact of Magufuli in Burundi 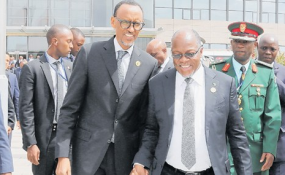 The long wait for the big news - the anticipated breakthrough perhaps - on the divisive trade deal between the East African Community (EAC) and the European Union (EU) didn't end with the expected on Saturday. Instead, it culminated into a sneak peek into the new regional game-plan to fix the bloc's trouble child Burundi - for long an outpost of bloody conflicts in the Community. The key resolution of the 18th Ordinary Heads of State summit in Dar es Salaam reveals what could be the culmination of fresh behind-the-scenes efforts to address the prolonged crisis.

Apparently at the centre of it is President John Magufuli, who seems to have been quietly building bridges in the increasingly dividing bloc as part of efforts to restore peace in Burundi.In passing the EAC chairmanship to his Ugandan counterpart Yoweri Museveni at the weekend, Dr Magufuli once again revealed a deep-seated desire to end the Burundi conflict.

He cited the crisis as one of the challenges that could not come to an end during his tenure - but hoped the incoming chairman would leverage on progress made in the past year to finish the job. By managing to rally the EAC heads of state together - and somehow convincing them to turn the EPA stalemate into a tool for fixing the Burundi crisis - President Magufuli revealed his quiet, yet growing influence in the EAC.

When he took over the rotational EAC chairmanship twelve months ago, there was little hope that he could deliver much to address the tricky conflict triggered two years ago after Burundian President Pierre Nkurunziza decided to run for a third term.In the absence of a clear, publicly-announced strategy, Dr Magufuli made a passionate plea over Burundi to the EAC heads of state. He made his case that it would be a misstep to leave Burundi out of EPA negotiations, considering that the country had already been placed under debilitating economic sanctions by the EU.

In Dar es Salaam on Saturday, he delivered the same message -- except that this time round, when he announced the regional bloc's decision to give the EU the condition to either lift sanctions against Burundi or forget EPA, it was more of a shout of victory. "In our meeting we have deliberated on the EPA issue and we have decided that we cannot sign it without the involvement of Burundi which is under EU sanctions," President Magufuli said at a briefing held after the summit.

"Of course there are still some issues in the agreement that we are continuing to sort out but removing sanctions could serve as a catalyst for us to sign." It may be a long shot. The EU ambassador to Tanzania and the EAC, Roeland van de Geer, insisted that "sanctions remain as long as the situation does not change, AFP reported Saturday. The Burundi crisis grabbed world headlines after 400,000 people reportedly died and hundreds left the country in violent clashes and targeted attacks.

These activities included acts of violence, repression or incitement to violence, and acts, which the international community said constituted serious human rights violations. As international pressure piled up on the Burundian government, accusations and counter-accusations began flying in the EAC with Rwandan President Paul Kagame forced to dispel allegations by United Nations experts last year that his country was supporting rebels in the neighbouring country.

Burundian authorities accused Rwanda of providing training, as well as financial and logistical support for rebels seeking to overthrow Mr Nkurunziza throughout last year. Mr Kagame denied the allegations saying the problems in Burundi originated from within the country, not elsewhere, as insinuated in the reports that fingered him.

Last March, the death in a Burundi jail of a former Rwandan minister who had been arrested for espionage further strained relations between the two countries. Faced with a huge refugee crisis, EAC leaders decided to act, but discord reigned supreme rendering their intervention weak and unable to stop the fallout. It appointed Mr Museveni to mediate between the Burundian government and the opposition in July 2015. But his has not been an easy job.

First, analysts have repeatedly doubted that he would succeed in his mandate considering the Burundian opposition's refusal to acknowledge him as a neutral mediator. The inclusion last year of former Tanzanian president Benjamin Mkapa could have helped that situation but it didn't help that much. In December, Burundi's opposition told Mr Mkapa to resign as mediator because he had recognised the legitimacy of Burundi's leader the issue at the heart of the conflict.

Second, while relations improved with the coming in of President Magufuli, there had been glaring tension between Tanzania and Rwanda over remarks then-President Jakaya Kikwete made in May 2013 urging Uganda, Rwanda and the DR Congo to negotiate with rebels in eastern DRC, the Democratic Forces for the Liberation of Rwanda (FDLR), in order to resolve the region's long-running armed conflicts.

Mr Kagame retorted describing the idea as "utter nonsense", sparking a diplomatic row that would leave the EAC deeply divided. In early 2015, the Burundi crisis peaked, sadly at a time Tanzania and Rwanda big brothers in the bloc -- had not completely buried their diplomatic hatchets, though they had started rebuilding friendship. Nevertheless, relations dramatically improved soon after President Magufuli assumed power. His close relationship with Rwanda could be what the doctor prescribed for the Burundians.